Blog
You are here: Home1 / Blog2 / Uncategorized3 / A Study on Insecticides

As you know, heat is the best way to effectively remove bed bugs from a house and/or your belongings.  However, bed bugs can also be fought with certain insecticides at certain stages of their life cycle.  In the article below, a study is discussed that used insecticides on bed bug eggs.  Read on to learn what worked and what did not.  Rely on professionals for insecticide and heat use, however, if you have a bed bug infestation.

Which Insecticide Spray Should You Use For Bed Bug Eggs? 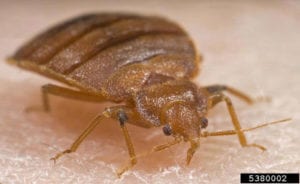 Well, it depends. The efficacy of different insecticide sprays depends on a few different factors, such as which strain of bed bug is being treated, how resistant the strain is to the insecticide being used, and the permeability of the chemicals in relation to the egg shell composition, reports a recent study published in the Journal of Economic Entomology.
In the study, researchers from Clemson University tested four insecticide sprays against bed bug eggs and recorded how many eggs ended up hatching. For the eggs that did hatch, the researchers also recorded how many of those nymphs survived a week, as the bugs came into contact with residuals of the insecticides after they hatched.

Two different bed bug strains were used for the study. One was from a colony of bed bugs kept by Harold Harlan for more than 40 years without any exposure to insecticides. The second strain was a Jersey City strain, which is resistant to a class of insecticides known as pyrethroids and recently showed moderate resistance to neonicotinoids. The Jersey City strain is closer to what would be found in the field or to what people would find in their homes than the Harold Harlan strain is.

During the test, all insecticides fared well against the Harold Harlan strain. A pyrethroid and a neonicotinoid/pyrethroid mix both resulted in no eggs hatching, while a pyrethroid/pyrethroid synergist mix and a halogenated pyrrole both killed all nymphs.

What do these results mean for the person trying to kill bed bug eggs?

The most effective insecticide overall was the neonicotinoid/pyrethroid mix, suggesting that having the dual active ingredients might give the best chance for success.

The study also shows that reading labels is important. For example, the pyrethroid and halogenated pyrrole both allowed nearly all eggs to hatch, but then killed nearly all nymphs. This result makes sense because neither product was labeled for bed bug eggs specifically.

The pyrethroid/pyrethroid synergist mix performed poorly both in terms of preventing egg hatch and killing nymphs. The label recommended spraying eggs for 13 seconds or until damp. The researchers sprayed the pyrethroid/pyrethroid synergist until damp to ensure that the application rate was similar to other products used in the study while applying the product at a rate that still followed the manufacturer’s recommendations.  If this insecticide was sprayed for 13 seconds, results might have shown it to be more effective.

In short, finding the right insecticide isn’t always easy. Make sure to read the labels to find the right product for your needs. If that product doesn’t work, you might be dealing with a resistant population and may need to find an insecticide with a different or additional active ingredient or seek the help of a pest control professional to identify an effective treatment plan.

The Places Pests Will HideUnwanted Thanksgiving Guests
Scroll to top