When you are on the road or vacationing somewhere you may pick up a few souvenirs for friends or family.  One souvenir we are sure you would never want, however, are bed bugs.  This article offers up a few pointers on how to make sure you do not bring any unwelcome guests home with you. 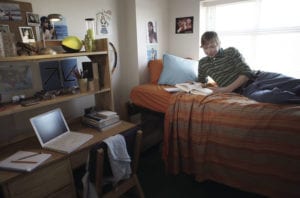 “Sleep tight, don’t let the bed bugs bite” may have been a clever thing to say when tucking children in at night, but bed bugs are more than just child’s play. Bed bugs have long been a threat to humans and other animals. Archaeologists have found fossilized bed bugs in human dwellings in Egypt that date back roughly 3,550 years. Greek playwrights have mentioned them, and they’re even referenced in the Talmud.

Even though bed bugs are commonly associated with areas void of cleanliness, just about any person can end up with a bed bug infestation. That’s because bed bugs are very good at hitchhiking. They can nestle into small crevices, such as in the cracks of suitcases, clothing and linens.

Then those same bed bugs can take up residence in another home, dormitory or office.

The National Pest Management Association says bed bug encounters have become more common in public places in recent years. Travelers need to protect themselves by learning how bed bugs operate and how to prevent them from becoming a problem. The following are some fast facts about bed bugs.

Bed bugs lead interesting lives.  It takes an understanding of their life cycle to be able to find them and remove them from homes and businesses.  Did you know they can go months without food?  Read more about a bed bug’s life in this interesting article.

Columnist Dana Wilde’s brother is an exterminator who finds himself in some weird situations with bugs and humans. 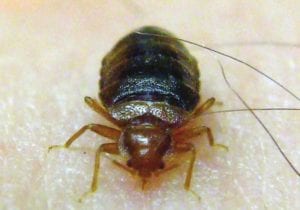 My brother Al is an exterminator. People call him up and tell him they’ve got ants, cockroaches, bedbugs or whatever crawling things they think they can’t stand anymore, and he goes out with equipment that, except in really complicated cases, solves the problem. He’s not weird. But as you can imagine, he’s got some weird stories.

One is about a guy who thought he had bedbugs but didn’t. When Al arrived at the apartment, the man sent his wife and teenage daughter out, saying he didn’t want them to get bitten during the ensuing battle. Al got a little uneasy. The man told Al to take off his shoes. Al got very uneasy, but he played along.

The man sat down in a chair, took off his own shoes and said, “Now just watch.”

After half a minute or so, Al said, “OK, what am I watching for?”

“Just wait,” the man said. “In a minute there’ll be bedbugs coming across the carpet by the hundreds.”

Long story short, there were no bedbugs. This happens more often than you’d think, Al told me, and he almost always ends up giving the people the good news that somebody lied to them about these nonexistent bedbugs, and going on his way. But this man could not be convinced and insisted the apartment be treated. Al said, “OK, I think I see one. You have to leave now.”

New research has been done regarding another method of repelling bed bugs.  The University of California, Riverside is responsible for the discovery that the skin bed bugs shed might contain chemicals that they avoid after the fact.  If more research proves this to be true, another way to keep bed bugs away could exist! 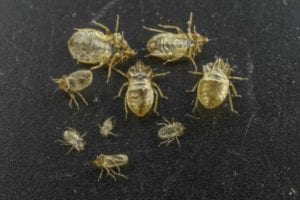 Researchers at the University of California, Riverside have discovered the shed skins of bed bugs retain the “obnoxious sweetness” smell often associated with the pests, a finding that could potentially be used to combat infestations of the insects.

Bed bugs shed their skins, known as exuviae, as they grow. Four pheromone compounds known as aldehydes are consistently found in the shed skins.

The findings could have significant implications for pest management industries, which can use some of the chemical / mechanical characteristics of the bed bugs’ shed skin to develop small, inexpensive monitor traps to catch living bed bugs at their early stages of infestation.

If you or someone you know works in a hotel this is an important read on what processes you should follow to keep bed bugs out.  Hotels are where a lot of people have picked up bed bugs in the past unknowingly bringing them to their next destination.  Check out the main points this article offers for bed bug prevention. 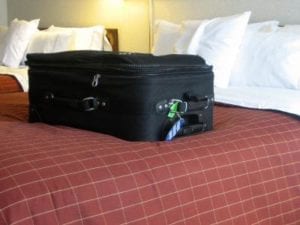 Bed bugs are becoming the bane of hotels across the country. An infestation can permanently scar a hotel brand when an outraged guest has his or her vacation destroyed by a bed bug encounter and then takes to social media or even the news with their story. Furthermore, potential guests are assessing whether a hotel has reported incidents of bed bugs; if so, they move on and reserve a room in a different facility. In either scenario, the loss of hotel revenue and reputation can be irreparably damaged.

Bed bugs can easily hide, evading housekeeping staff inspections and pest control professionals. It takes just one impregnated female bed bug or several missed eggs to be introduced by a hotel guest or your own staff to restart the infestation cycle.

Hotel rooms have regular guest turnover and are constantly challenged with new bed bug introductions; these pests are notorious hitchhikers. Once an infestation establishes, bed bugs are incredibly difficult to control. Hotels throughout the country are protecting their guests, reputation and stakeholder’s equity by educating themselves on this blood-sucking pest. The following facts can help you better understand what you’re up against when it comes to bed bugs.